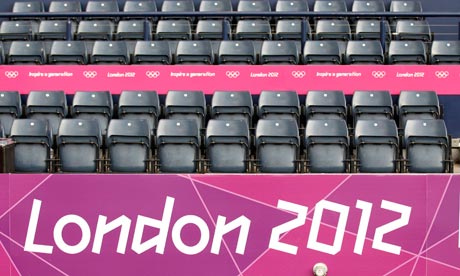 Today we’ve heard about the dark side of the Olympics and social media.

So let me show you how it can be used in a positive way – and solve problems too.

As you may have read before, on Saturday I went to the Olympic Park after managing to get a £10 entrance only ticket to the park, not expecting to see any games action other than on the big screens.

But as we walked around the site, I came across a long queue for the ticket office. It was for recycled tickets to watch the basketball and handball. So after a half hour queue, I found myself picking up a £90 ticket to see the US v Croatia in the basketball arena for just….£5.

When I went home I saw the huge PR disaster that was emerging from the blocks of empty seats at various venues in and outside the Olympics Park.

TV, print and online were all showing the pictures of sparsely-attended events, because of the absence of VIPs, sponsors and the ‘Olympic Family’ – officials, dignitaries and the media.

So I thought I’d sit down and attempt to come up with a solution in my blog – a 30 minute use-it-or-lose-it plan to recycle tickets for seats not taken within half an hour of the start.

You can read it here.

I posted the blog on Saturday night and since then I’ve been amazed it has been viewed more than 20,000 times with more than 500 tweets and re-tweets.

For the first and probably only time, I trended on Twitter in London. My tweets were RTd by Stan Collymore and Alastair Campbell.

Even Gary Lineker supported the campaign and started the hashtag #filltheseats. 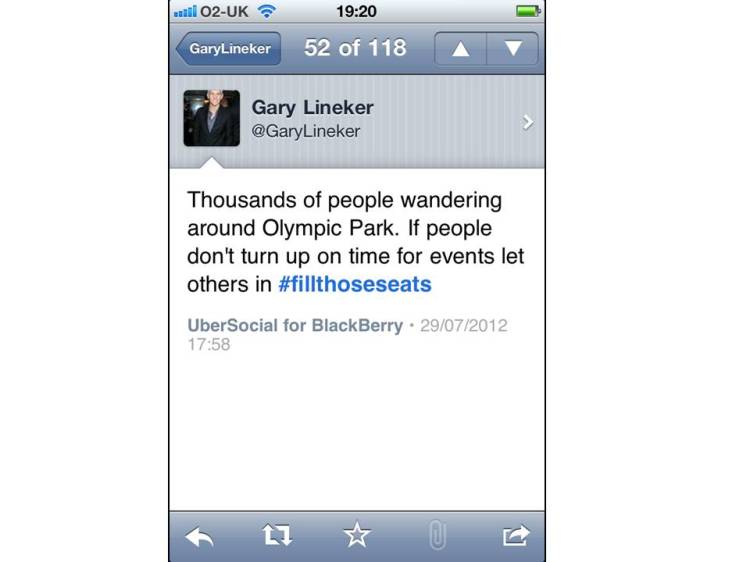 As a result I found myself doing a live two-way on Sports Tonight on Sky (live via my iPad’s Skype from my kitchen!, an hour long discussion about the Olympics on the BBC World Service’s World Have Your Say show to 180 million listeners, a two-way with France 24 and an hour long slot on Nick Ferrari’s LBC 97.3 Breakfast show.

On Sunday afternoon, the Chair of the British Olympic Association Colin Moynihan adopted my 30 minute use-it-or-lose it policy and yesterday Culture Secretary Jeremy Hunt said he was backing the plan too.

But whilst that’s all well and good, the #filltheseats plan has not come into effect yet.
Locog are still trying to solve the problem by getting the Olympic family to hand back tickets.

I’ve been receiving tweeted photos throughout the day on the hashtag to show there are still not enough bums on seats.

Whilst it’s a start to get more than 3,000+ unused tickets a day back in the system, the 30 minute plan would free up thousands more – and a lot more quickly.

There is also still confusion as to where you could get recycled tickets. It appeared the recycling system was stopped completely on Sunday as Locog tried to regroup.

It transpires, from a Games official who told me on condition of remaining anonymous, that Locog thought if it actively promoted ticket recycling there would be massive queues of disappointed people waiting for hours to get a recycled ticket. That’s an image the organisers desperately didn’t want to see.

The alternative was of course rows and rows of empty seats, giving the wrong perception that Locog can’t organise a Games and the British public don’t care about sport.

My guess is that Locog had hoped it wouldn’t have to forcibly recycle tickets for fear of alienating the ‘Olympic family.’

But the images continue to be plastered across papers and TVs around the world and I think there is now no choice. (Check out the Guardian’s running blog of empty seat pictures.) 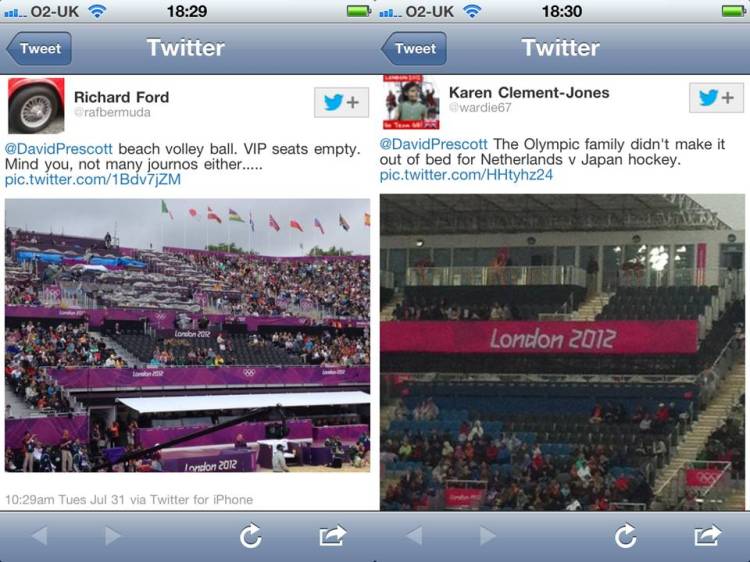 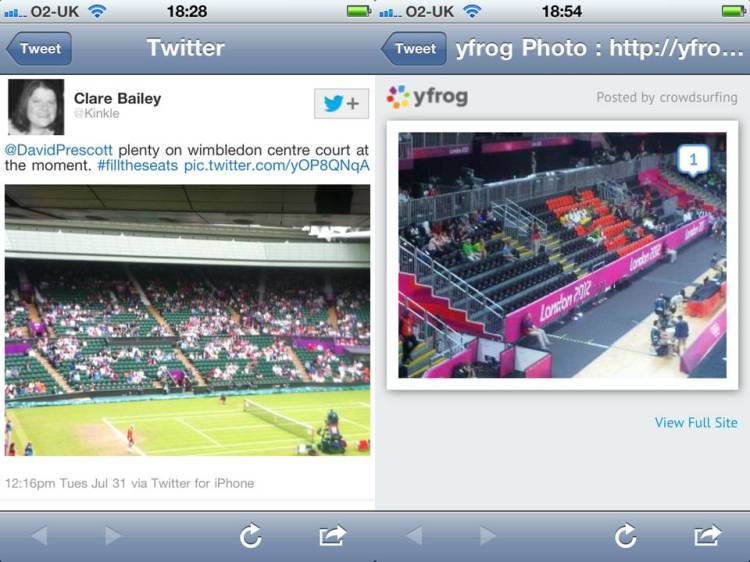 Believe it or not the Wimbledon match was Venus Williams’!

What we need know is for Locog to grab the nettles – even if it annoys the IOC – and bring in the policy of ‘use-it-or-lose it’ after half an hour. If they’re later than that, they can be fastrtrackerd to get the next recycled ticket.

But I’m also hearing from people that there’s still a big problem on ordering tickets online.

@nerdalicious_me said: “Can you blog about the monstrosity that is the London 2012 ticket site? No point release tix if ppl can’t buy them!!”

And @Bonkybonkbonk tweeted “They’re releasing seats at their full corporate price. So upwards of £125 per ticket, out of reach for your average fan.”

I’ve just taken a quick look at the ticket site (actually it’s not a quick look, it’s painfully slow with log-in process and a terrible search facility) and prices are still quite high though there’s odd bargain if you fancy football.

But the one ticket you won’t get are day Olympic Park access tickets. Which is a shame because there’s more than enough space inside for people to enjoy the Games even if they can’t get into an event.

So I hope they go further and follow my other proposal to make more day access tickets available, maybe 100 on a first come first served basis on the gate but ONLY if you go straight in there and then. (That would stop them being touted.) You could then add more based on people on a one in one out basis.

But out of any adversity or crisis comes humour. And Twitter has a new star.

I’ll leave you with some of the best! 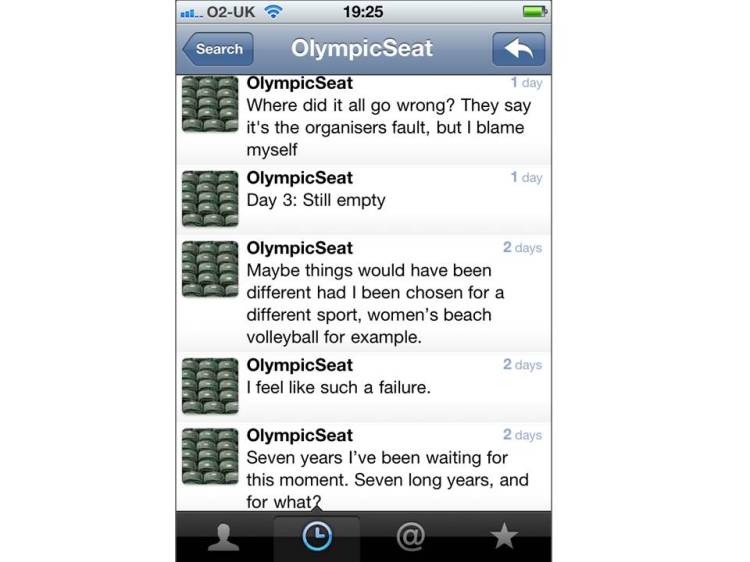